Representatives of Barka Network, Dorota Harembska ( Barka UK), and Magdalena Chwarścianek ( Stichting Barka NL) took part in the annual conference organised by FEANTSA ( the European Federation of National Organisations working with the Homeless) The conference was held in Paris and was titled ‘ Homelessness- a local phenomenon with a European dimension’.On the first day of the conference Magda and Dorota took part in a  study visit at Emmaus Defi  in Paris. Emmaus is a social and vocational reintegration project for homeless and long term unemployed persons. Emmaus movement was started  in 1949 by abbe Pierre ( father Pierre) – French priest, who devoted his life to supporting the homeless, vulnerable and migrants. Emmaus movement is active in more than 40 countries, including Poland. Each Emmaus has a seperate board and a very unique way of operating. 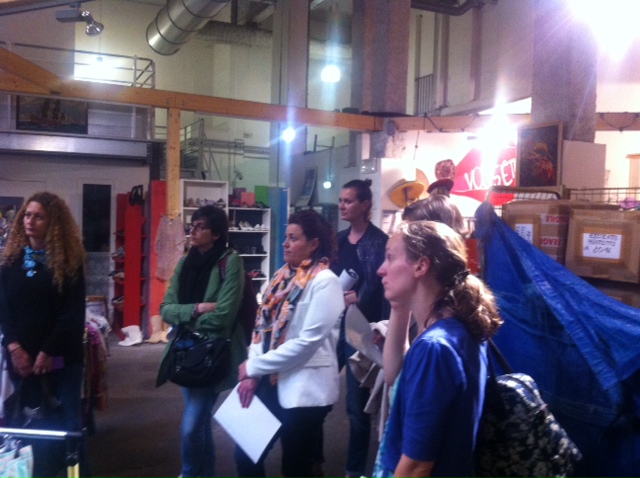 Emmaus Defi in Paris is one of many Emmaus projects in France and also in Paris and was created in  2007.   It is a reintegration programme which gives social employment to homeless and long term unemployed  people in Paris.  The task of Emmaus is collecting second hand  furniture, clothes etc, which Parisians bring to special designated collection points. Those items are then being sold in Emmaus shop. Currently, there are 140 persons undergoing  reintegration and social employment at Emmaus Defi.  It is the biggest reintegration structure in Paris.  The work of Emmaus is co-financed by the City of Paris. We learned that also Polish people are undergoing reintegration and are employed  at Emmaus.  The social employment is adjusted to the capacity of the person. Often homeless people who live in the streets , start working at Emmaus for 4-6 hours per week.  The working time is being increased gradually. Such a preliminary phase of employment can last 6-8 months.  During that time each person has a social assistant who works with them  collecting second hand items and at the same time tries to help the person address the issues like addiction, housing situation etc.  The presence of such a support worker facilitates social and vocational reintegration.  A person who has some housing arranged can receive a 26-hours per week social contract.  Currently, among 140 persons employed at Emmaus  there are 23 persons who are reintegrating  from street homelessness.  Social contract for employment and reintegration at Emmaus is given for 2 years. During that time a person not only has a possibility of employment, but also gains support in rebuilding their lives in other areas ( socially, housing, family relations, health, addictions etc)   City of Paris treats Emmaus Defi as an important social partner which carries out reintegration activities.  There are also some pilot social projects tested at Emmaus commissioned by the City. Those projects have a chance to become models alla cross France in future.

On the second day of the conference there were plenary sessions held.  The panelists were representatives of local self-governments ( France, Greece) national governments ( France, Ireland, Luxembourgh)  MPs, European Commission representatives and organisations from various countries.  The main themes of the discussion were: the role of EU in addressing homelessness, key elements of good homelessness policies, how to integrate local activities with national policies etc. Another issue raised was the tendency of cutting down on expenses in the area of social policies. The City of Paris was pointing out that the numbers of homeless people in Paris and Franace are growing. Many migrants who come to Europe looking for better opportunities land in the streets.

During the workshop on EU funds  for inclusion programmes  there were good practices presented.  Organisations from Italy and Wales are using the EU funds to run reintegration programmes for homeless people.  They are still facing some challenges though- like for example lack of continuity of the programmes.  Well functioning projects need to be finished when the funding stops. It is often a dramatic end and usually  the beneficiaries are dissappointed and can’t understand it.

During the workshop on domestic violence and its relations to homelessness among women St’Mungo’s organisation from London and Women Against Violence  from Vienna presented good practises in the field of working with homeless women and including them in the programmes as staff members.

The conference was attended by 300 persons representing organisations and public bodies from all over Europe. It was a great  occassion to exchange experiences, to brainstorm and to pickup good solutions.