Mr Dacian Ciolos, the Prime Minister of Romania, paid an official working visit to the Hague in order to strengthen the relations with the Dutch authorities and to highlight the progress Romania has done within the integration process asayoung member of the European Union and as an aspirant country to the Schengen Area.

Beside the diplomatic, official meetings, Prime Minister was keen to meet also the Romanian diaspora in the Netherlands. Representative of Stichting Barka- Larisa Melinceanu-used the opportunity to share good practices of Barka Network and shortly introduced to the Prime Minister the perspective of replicating in Romania the model/ concept based on social economy which was successfully developed in Poland, a country which had to heal from the same traumatic communism experience as Romania still does. 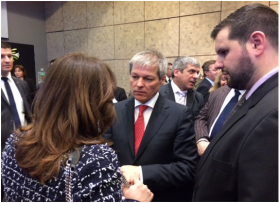 Prime Minister was pleased to hear about such initiatives which actually come to meet his vision about the important role of the Romanians living outside Romania. This was actually the key message he wanted to pass to the Romanian community in the Netherlands. There are already some official initiatives of creating a platform with the objective of facilitating the transfer of skills, expertise and contacts of the diaspora back to Romania, for the benefit of Romania’s development. Through this platform, there will be created communication bridges between the Romanian specialists from abroad and their counterparts in Romania, so that they can transfer best practices in various fields.

Prime Minister happily received from Larisa the book “New beginning – Social market economy” where Barbara Sadowska, the author of the book and the co-founder of Barka foundation, resumed 20 years of experience in the sphere of social entrepreneurship. 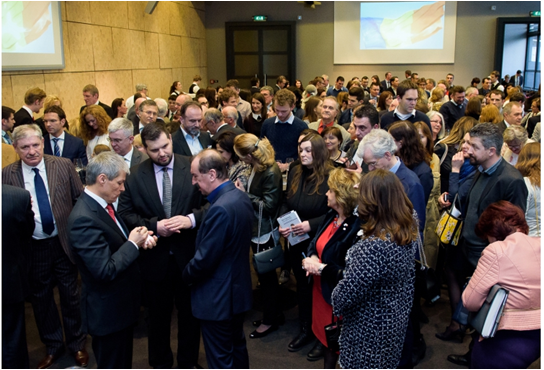