Barka Foundation has been awarded for supporting those most affected in the process of political transformation in Poland, and for popularizing the Social Economy in the world. One of the most important awards for outstanding citizens and organisations in the EU – the European Civic Award – will be presented to the Barka Foundation for Mutual Help. Justification and the nomination for this award was presented by MEP Agnieszka Kozłowska-Rajewicz.

The prize is presented annually by the European Parliament. It honors outstanding achievements in the following areas: activities of citizens, groups, associations and organizations demonstrating an exceptional commitment to develop a better mutual understanding and deeper integration between nationals of Member States or to facilitate cross-border / transnational cooperation in the European Union. This may include activities and projects undertaken by citizens engaged for a long time in the cross-border / transnational cultural cooperation contributing to the strengthening of the European spirit; daily activities of concrete character reflecting the values enshrined in the Charter of Fundamental Rights of the European Union. 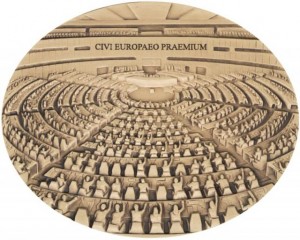 Nomination can be submitted by the Members of the European Parliament. Therefore, in addition to the merits of the candidates, crucial is a proper preparation of arguments in favor of the nomination – to convince the jury.

Barka Foundation was established in 1989. The organisation creates conditions for empowerment of hundreds of thousands of socially marginalized people throughout the world, including the creation and development of vocational training schools for the unemployed, the promotion of social entrepreneurship and affordable housing programs. Barka educates whole environments on how to build structures which help vulnerable people return to the labor market. Barka also works in 8 local borough councils of London as well as in a number of other European capitals, helping to integrate stranded migrants. Annually, the Foundation’s premises admit many dozens of delegations and study groups from all over the world who want to pursue in their countries the social activisation programs based on the Barka model.

The Foundation’s projects have been repeatedly evaluated and appreciated by various institutions, governments and media. Barka Foundation obtained a number of awards such as: World Habitat Award, Washington in 2009; I Award for the Most Innovative Project in the contest of the Global Development Network (GDN) in Beijing under the auspices of the World Bank in 2007, II Award of GDN in Cairo in 2003; The “Time Magazine’s 2003 European Heros; Silver Rose Award awarded by the European Organization SOLIDAR in 2001; Pro Bono Publico Award on the tenth anniversary of freedom in Poland – a distinction from the Prime Minister Jerzy Buzek, 1999; The title “Innovators for the common good” awarded by the International Association of Social Innovators “Ashoka” -USA, 1996 – to name a few.